“Man Made” (Video and Poem)

Special thanks to Xurious and the unknown but highly talented editor HCF. For a different age I was born,
every man has once said,
where each was to honor sworn,
rather to all this cowardice bred,
thus for a gilded time we mourn,
insisting such days forever dead.

Yet of all the feelings ever known,
longing for a time not your own,
is when true cowardice is shown,
especially if dark the age is grown,
for like dawn light in black sown,
all darkness will be overthrown.

All darkness will be overthrown.

Instead one is given a great gift,
born in darkness and darkest days,
he’s given trials, mountains to lift,
aye, the very minotaur in his maze,
he’s called to be strong, to be swift,
a hero upon which his sons gaze.

So appear you king or appear you slave,
among the good or a people strayed,
with actions now, the future pave,
for the coward is he who delayed,
product of his age, cradle to grave,
but an age makes not, it is man made.

It is man made.

The Eagle Caste (Video and Poem)

Special thanks to Xurious for mixing audio on this video.  Poem, video and reading by M. Brahmin.

Ode to Son (Poem and Video)

Music and mix by Xurious.   Video, Voice and Poem by Mark Brahmin. 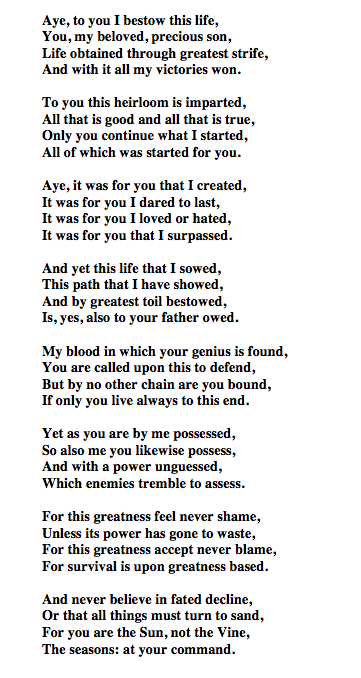