Much like the frequent repetition of the number seven appearing in Biblical works and the appearance of “reapers”, most notably in Revelation 14[1], circumcision is a clear esoteric reference to the castration of the Aryan male as described in Saturn’s castration of Caelus (or Kumarbi’s castration of Anu).  Let’s consider, for example, Christ’s circumcision.  Here, as part of the ritual, oddly, two doves were sacrificed. [2]

In the ancient world, the dove was a symbol of the Aryan Venus and Ishtar.  Indeed, elsewhere in the New Testament, particularly as appearing in baptismal symbolism, we see the appearance of doves as seeming references to Venus, “The Holy Spirit”, Psyche or Aryan womanhood more generally.  In Christ’s baptism, a dove or “The Holy Spirit” descends suggestively onto Christ during the ritual as this study explicates.  Baptism in the Jordan river itself is a reference to sexual intermixture particularly with Aryans as this study explicates.

Here we also understand that Venus was born from the castrated member of the Aryan Sky God Caelus.   By Saturn’s castration of Caelus or by his theft of Caelus’ “daughter” or genes a racial cuckoldry is indicated.   Thus Caelus’ penis and Venus become in some sense Symbolic Synonyms.   Here, through the racial cuckoldry that castration or circumcision symbolizes, the Semite is severing or cutting the genetic line of the Aryan. Likewise, the dove, representing Venus, and the foreskin or Caelus’ penis also become Symbolic Synonyms.

Hence, the destruction of the doves, in Christ’s circumcision, comes to symbolize not merely the destruction of Aryan womanhood but Aryan potency, fertility and masculinity.  We can be sure that the covenant of circumcision is a symbol of access to Aryan womanhood as well as the emasculation of Aryan men.   We find this Hebrew word mahul, מָהוּל, meaning “circumcision” also means “mixed, diluted, adulterated, blended.”

Understanding the Jewish connection to a Semitic Saturn here, it seems possible, if not certain, the practice of Jewish circumcision finds or shares an origin with the Cult of the Semitic Cybele.  In Judaism the actual castration that appears in the Cybele cult was modified into a more symbolic form.

In the cult of Cybele, Galli, Cybele’s male priests, are supposed to have castrated themselves in a ritual known as Dies sanguinis or “Day of Blood.”  Again, we might understand the ritual as relating to Saturn’s castration of Caelus.  There Saturn is ostensibly defending Terra, his mother.  Indeed, Cybele, Terra and Rhea were regarded the same deity at least by the Romans via Interpretatio Romana.  For these three deities they used the term Magna Mater.

Yet more broadly circumcision might be understood as symbolizing the castration of a slave and the creation of eunuch or “gelding”.  With Abraham’s circumcision performed as a covenant to Yahweh, for example, we see an Aryan being made a gelding vis-à-vis a Jewish God as this study explicates.   In fact, we might suspect the term Galli is related to the word Galilee as it appears in Biblical Works.  This would be meaningful as Galilee might be understood as equivalent to the modern, jocular expression of “White-topia”.

Regardless, the venerated ideal of the transsexual promoted by a Jewish media today represents not merely the Galli of the Cybele cult or the feminized man but, more importantly, a castrated slave or gelding.  Indeed, we might suspect the Wachowski “sisters”, who are knowledgeable Jewish Esotericists, “transitioned” precisely to present themselves as emasculated models and bellwethers for unconscious Aryans.  If so, this demonstrates a profound devotion to a Jewish cause.

The Wachowski “sisters”, both “trans-women”, might best be understood as modern day Arch-Galli.  Here there may even be a conscious desire to function as “bellwethers” for other acolytes or would-be “trans-people.”

All this causes us to wonder at the meaning of the ubiquitous practice of Jewish circumcision as it is practiced on the Jew himself.   Indeed, it appears certainly a kind of self-emasculation is occurring here that is also a reference to the Semitic Saturn’s castration of the Aryan Caelus or Kumarbi’s castration of Anu.

On one level Jewish circumcision might be understood as a kind of voodoo ritual designed to summon or “cut loose” desired Aryan stocks.   After all, here it is practiced on phalli within the orbit of Jewish control that are, counter intuitively, used to represent Aryan phalli.  Though where host populations can be convinced to adopt the practice —as has occurred in the modern world among Anglo-sphere countries— it is practiced as well by a deceived or benighted host on actual Aryan phalli.

Genesis 34, where Canaanites are convinced by the Israelites to circumcise themselves are then slaughtered as they are recovering from the wounds, tells us plainly that the practice of circumcision is not brought to a population with beneficial intent.  Hence, the JEM achieves greater power as a ritual castration or emasculation when it is exported to non-Jewish host populations.

This faked-castration, called circumcision, strikes one as a form of the familiar false humbling, self-curtailment and self-deprecation that so characterizes Jews.  Vis-à-vis Aryans, this false humbling clearly serves, firstly, to lower the Aryan’s guard and secondly, to posit a humble, deracinated, emasculated “Christ-like” bellwether for them to follow.    The notion here is akin to the false Jewish scapegoat of Christ or Adonis.  Ostensibly, a Semitic figure is dying, being denied access to Aryan stocks.  Esoterically, he is resurrected, triumphant, persisting through those very Aryan stocks.

Of course, beyond the symbolic, doubtlessly there is a very direct psychological effect intended through the physical practice of circumcision.  Here a defenseless baby is suddenly wounded in an incredibly painful and yet sexual way.  Here we understand the younger the human, the more formative the experience.   There are two things to consider here.  First, the practice is akin to castrating a gelding. Second, to traumatize the child. Thus, we assume it is intended with the purpose to enslave.

Here one hopes to breed passivity into an animal but especially toward the breeder or shepherd.  Religiously we understand this as subservience to the Jewish God or Jewry.   As a changed temper and behavior was observed in the eunuch over successive generations encouraging the practice of creating eunuchs to continue, doubtlessly a behavior was observed in the circumcised which likewise justified the continuation of this practice. 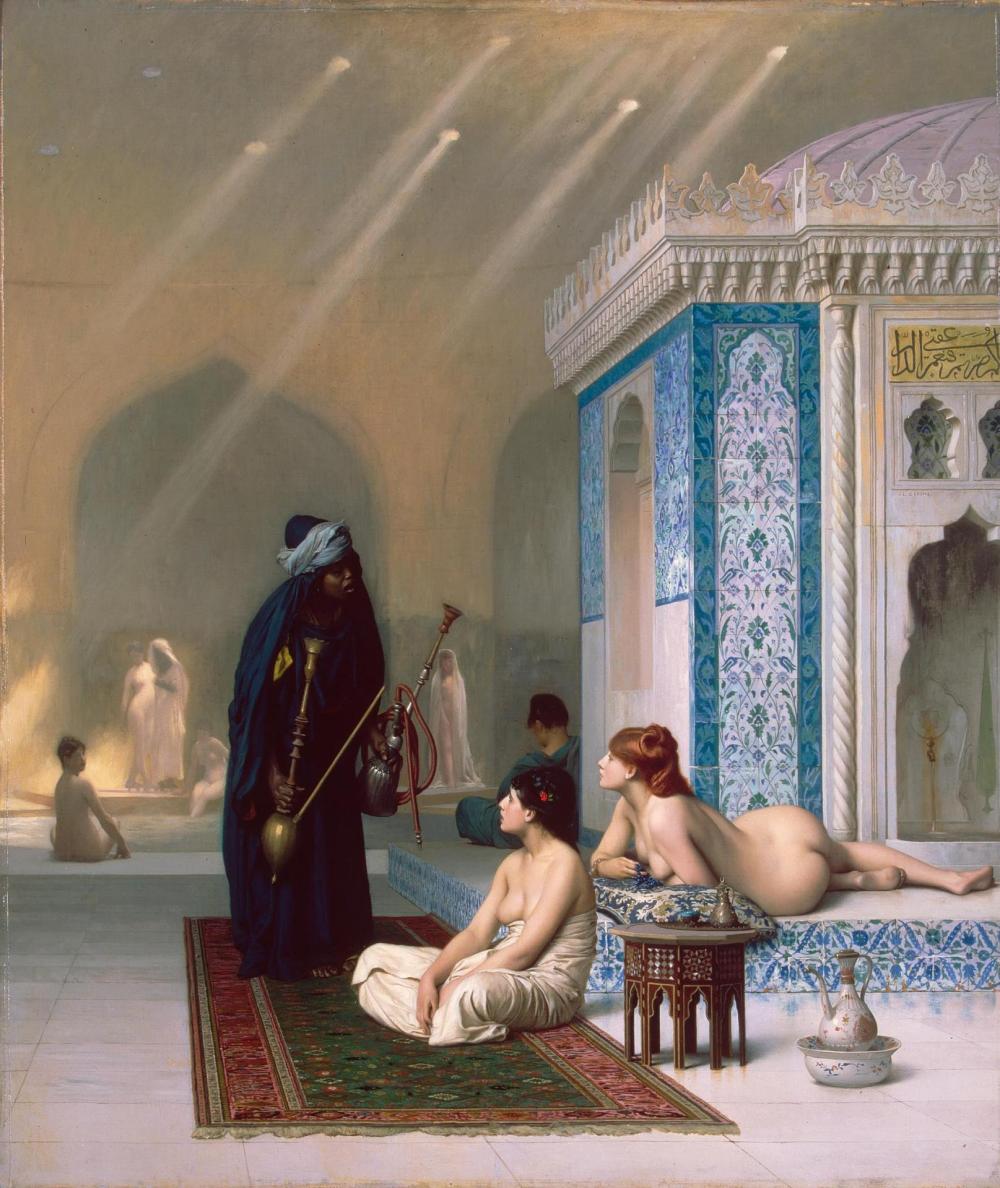 Did circumcision develop, as a modification, from the practice of castrating slaves?

In other words, circumcision bred the servility they had hoped it would when first they experimented with this cold practice.  Importantly, of course, it allowed for geldings or psychic slaves that could also reproduce.  Indeed, it is incorrect to believe circumcision arose from some primitive, unintelligent, superstitious belief however barbaric we regard it.

In the Orthodox case, where we see the Mohel sucking the blood from the circumcised child’s penis we may also see an effort to develop an ethnically cohering, “strategic bisexuality” in the child.  Here the Rabbi seeks to take advantage of the “polymorphous perversity” of the child as Freud carefully and tendentiously described it.

This seems corroborated by the strange, sensual resurrection ritually performed by Elisha on the Shunammite child in Book 2 of Kings (4:33) where he repeatedly “[laid] on the boy, mouth to mouth, eye to eye, and hands to hands.” Prior to this the child had gone to visit the “reapers” in the field and suddenly his “head” hurt and he “died”.  Doubtlessly this is a metaphor relating to circumcision as this study explicates.

Doubtlessly as well Elisha’s sensual interaction with the child, so that he is “resurrected,” points to a post-circumcision interaction akin in some ways to the sucking of the blood from the penis.    Indeed, Elisha, along with Elijah and Jonah, are certainly pederastic figures formed from a Religious grooming practice as this study explicates.  The operating theory appears to be, the younger the child, the more meaningful the experience and the more impressionable “the clay.”   This understanding appears, for instance, in the word Golem which means both “formless” and “embryo” and describes a controllable creature.

Yet, the feminizing of the child, whether through the partial castration of circumcision or a pederastic ritual is also is a way of making the child “servile” to a male Jewish God.  Incidentally, the sucking of blood from the child’s penis may be a reference to Kumarbi’s devouring of Anu’s penis or vice versa.   There, symbolically, a Semitic God is “ingesting” or assimilating the desired genes of the Aryan.

Appearing more explicitly in the symbolism of circumcision, the sexually competitive Jew enters in among Aryans disguised as an innocuous eunuch of sorts, an androgyne or self-emasculating “religious man”.  Ostensibly circumcision was developed for the opposite reason: to demarcate and separate Jews from others. So was the entirety of their religion. As discussed, in practice their Religion has operated through all periods of history, much differently.  Indeed, Circumcision, as this study reveals, is itself a symbol of admixing with Aryans, it’s itself a symbol of “blood covenant.”

Strikingly, circumcision carries with it a sense of self-flagellation where “evil” sexual instinct and the organ of its origin is punished.  It is a gesture not unlike, for instance, the depressed modern teenager, alienated or jilted by the “popular crowd” and implicitly access to their women, engages in self-laceration.

Particularly as circumcision operates as a reference toward Saturn’s castration of Caelus, one senses a deeply sublimated sense of guilt toward especially a kind of Semitic earth mother, like Terra, Cybele or the “unloved” Biblical Leah.  Terra was the one whom Saturn was defending from the ostensible rape of the Aryan Caelus. Though, of course, the castration of Caelus also “liberated” the desirable Aryan love goddess Venus formed from Caelus’ genitals.  Thus it is fraught with psychological neurosis and ambivalence.

There may be another layer to this metaphor that imagines the phallus as a serpent as certainly appears to be the insinuation both in Genesis and the Bacchus Cult.  Here the shed foreskin of circumcision may also represent the shed serpent skin. In other words, we might deduce the serpent’s habit of shedding skins is understood in metaphor as the “changing of skins” or “identities.” To wit, it is a metaphor for Jewish or proto-Jewish crypsis.

In Darren Aronofsky’s 2014 film Noah, the skin of the serpent of the Garden of Eden, is passed down generationally as a sacred heirloom.  He, and religious Jews that suggest Adam retained the serpent’s shed skin, may be suggesting it as a foreskin.  On the other hand, this may function as a metaphor for the clear and repeated tendency of Aryans to adopt cultures, religions or art forms that Jews or proto-Jews develop.  Adam, after all, is an Aryan figure.

Regardless, Jewish crypsis, as this study makes clear, has been an attribute as old as Jews themselves originating certainly before they called themselves Jews.  Likewise, the JEM reveals it as a constant fixation.  And to be sure, the Serpent is associated especially with deception throughout world mythology.   Again, in the Garden of Eden, the word for serpent nakhash, נחש, is revealing. It means also “magic”, “sorcery”, “spell”, “enchantment” and “augury.”

View all posts by markbrahmin